HaaS: Financing Equipment Instead of Buying

Technology upgrades have become one of the biggest expenses for schools, and with technology changing so quickly, it can be especially hard to keep up with the latest hardware. New costs for equipment can come up every two to three years with schools trying to stay up-to-date.

That’s why districts have turned to a new strategy: financing equipment instead of buying it.

Hardware as a Service: About Financing

The cost of equipment is spread out over its usable life, and makes new technology reachable for schools with tighter budgets. It’s sort of like leasing a car - the schools pay a small amount at a time for the use of equipment and returns it at the end of the financing period. The academic lease runs between two and four years.

For most schools, the goal is to have one computer per child. But when you tack on other technology that goes with it, like projectors, networking, and software, the cost can reach a minimum of $1,000 per student, which can be impossible for some schools to budget for. With financing, schools can ride the wave of technology and look forward to a regular and predictable payment.

By spreading out the payments, financing can make it possible for schools to afford not only the technology, but other important project investments for the school- such as maintenance and after- school activities. When financing, neither the district nor the school actually owns the hardware, which makes it much easier and less costly by end of the system’s life. By financing instead of buying, the school is relieved of the financial burden of system disposal. It can cost between $50 and $75 per machine to safely dispose of a computer.

At the end of the lease, the school typically has the option of returning equipment to the supplier or buy it- most schools return the machines. However, there’s a third choice that’s becoming increasingly popular. Many schools choose to trade to the latest hardware.

By trading up at the end of the lease, the school never has systems older than two-to-four years. On an even better note, the school’s lease payments for the new, more capable equipment are often the same as they were for the old items.

Choose What you Lease Wisely

financing works best with items that are still worth something at the end of the lease. The residual value lowers the lease payments along the way, making equipment more affordable.

Although financing can be a little more complicated than buying, all the manufacturers either offer leases directly or through a financing subsidiary. Third parties will often buy equipment and rent it to schools on a short-term basis.

Financing isn’t for Everybody.

Often, computer makers and financing companies are flexible enough to structure the payment schedule to accommodate to the budget of a school. Most school districts prefer the predictability of making monthly payments, but others schedule an annual payment for when finances such as property taxes are disbursed, private-school fees are paid, or when other inflows of cash are received at the end of the year.

Like most leases, companies charge interest to pay for the equipment and expenses. Interest is charged from 5 to 15 percent a year- and interest charges can add up quickly. Over a two or three-year lease, the school might end up paying an extra 25 to 50 percent. But for some schools, they believe that it’s a small price to pay for spreading out payments. And when things go wrong as they often do with computers, financing includes full support and repair services for the life of the lease.

Interested in financing instead of buying some of your equipment? Contact your consultants! We are here to make sure you are getting the most out of your hardware.

Want to learn the pros and cons of financing HaaS? Click here for more information.

Next Weighing the Pros & Cons of Hardware as a Service Financing (HaaS) BLOG Previous Cryptowall: How can your district protect itself?

The State of Student Mental Health

When you think back to your youth, do you remember feeling inadequate? Maybe you ended up not doing so hot on a test you studied endlessly for, you didn't make varsity football, or the prom queen's dress looked much better...

The Tech Student of Year Scholarship is now closed, and we are happy to announce X winners from across the Rocky Mountain Region. This year was outstanding; Pine Cove gave out an extra $3500 thanks to many $500 donations and one exceptional $1500 contribution. 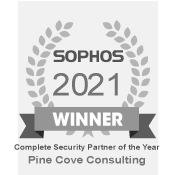